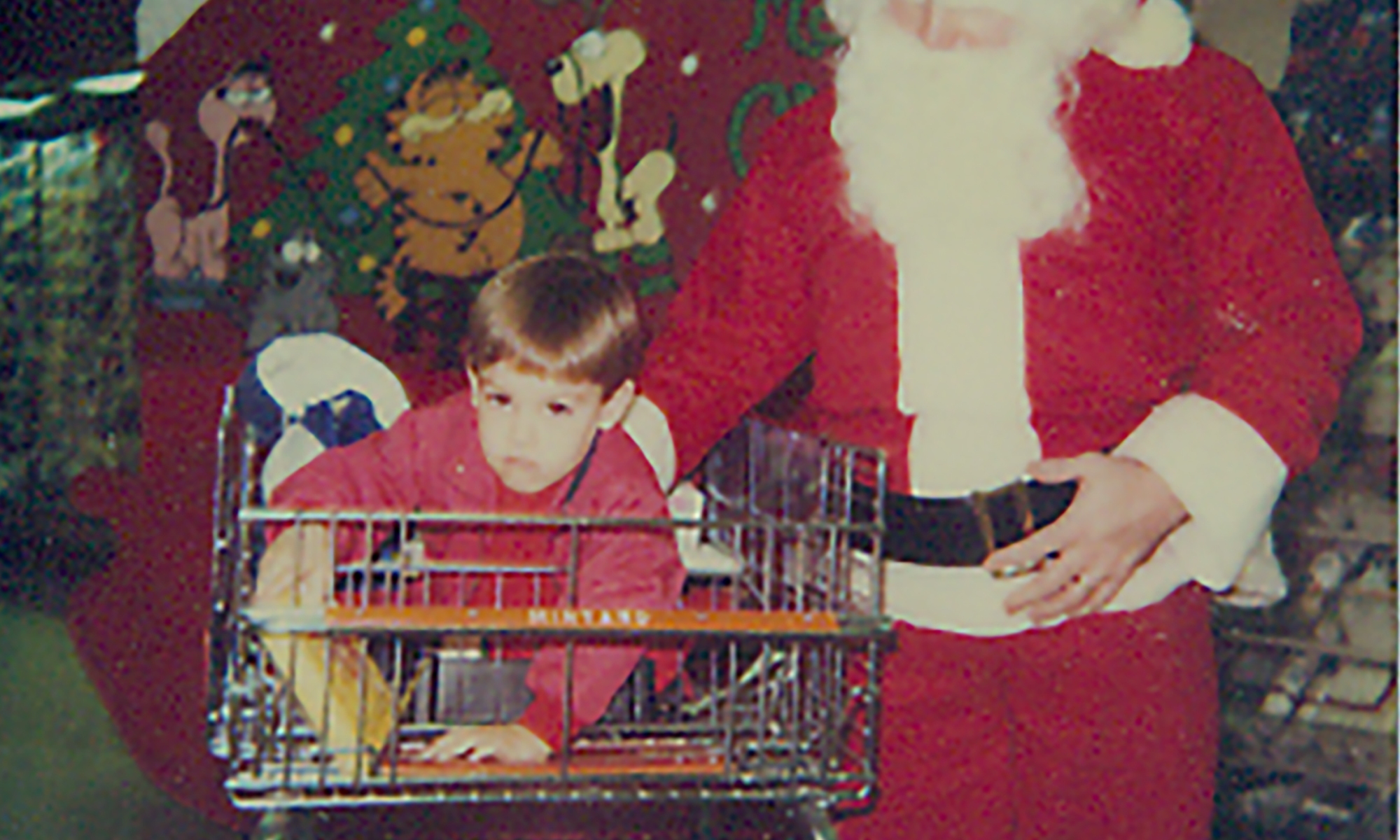 I had a fairly normal suburban American childhood. My dad worked in downtown Dallas which felt like a wondrous Oz—oversized and industrial with a skyscraper lit in neon green light presiding over the cityscape—but back in our neighborhood, life felt more simple. Not quite Munchkinland, but simple. Summers in the suburbs were speckled with block parties at the end of our cul-de-sac, feeding horses in the field behind our house and swinging on our backyard swing set while eating Blue Bell ice cream sandwiches after dinner. We sucked the nectar out of the honeysuckle growing through our fence, conquered the streets and alleyways on our bicycles, and explored the enormous cement tunnels that connected the storm drains underneath the roads. I was mesmerized by those tunnels and am still convinced they’re full of alligators and lead to Whoville or Narnia. We rollerbladed in the street with our neighbors, climbed trees in the rain without fear of being struck by lightning, and spun around in our front yard until we were so dizzy we collapsed on the ground wishing for swift deaths. Then we’d get up and do it all over again—laughing and loving our simple lives that occurred before sunset when it was time to get inside for episodes of Star Trek: The Next Generation and I Love Lucy before bed.

It was the late 1980s, a time when Steven Tyler was more cool than he was annoying, and some of the last remaining vestiges of small town Americana were still traditional in Coppell, Texas. One of those traditions was the presence of Santa in neighborhood grocery stores between Thanksgiving and Christmas Eve. Today, Santas are relegated to malls and Macys but then, the suburbs were lousy with them. I was comfortable with Santa being on his big Christmas throne attended by over-sized elves as long as he stayed behind his red and green picket fence. As long as there was a literal barrier between us, I could tolerate Minyard’s Santa just fine. But imagine he broke free from the confines of his chair and began roaming unsupervised through the store. Imagine Santa wandering up and down the aisles hunting for children like a loose Velociraptor. Now imagine a small child standing up in his mother’s grocery cart, screaming while climbing over toilet paper, carrots and hamburger meat in an attempt to get away from that Santa. This is no imaginary scenario because on that day, the screaming child was me.

As early as I can remember, I was terrified of people dressed up as characters. Santa? No thank you. Mickey Mouse? Get me out of this park. The Easter Bunny? Are you kidding? The special needs rabbit from the Trix cereal commercials may have been obnoxious but his heart was in the right place and Bugs Bunny may have been prone to violence but he also promoted vegetarianism and healthy snacking. This Easter rabbit with an egg fetish is not okay. Just hand over the Cadburys and let’s call it a day.

As Minyard’s Santa approached, I frantically tried to claw my way to the other end of the shopping cart in an attempt to get away. I had no interest in seeing, hugging or making small talk with him and in return being handed one of those tiny participation candy canes. If I had to suffer through interacting with that “jolly” man, I expected to get something off of my list. I didn’t ask for that shitty little candy cane. Despite my protesting and crying and screaming, I made it out of the grocery story unharmed but the PTSD from that rogue Santa on the loose lingered.

My encounter with Minyard’s Santa that day was nothing compared to what happened a few years prior at the “Happiest Place on Earth,” when my fear-based hysterics ruined a character cruise. As I ate my eggs, Tigger approached like Shere Khan in the tall grass and I began screaming in terror. I’m sure the people seated near my parents’ table were asking, “Why would they bring a kid here who doesn’t like Disney characters? Why are they such bad parents?” Mind your own business. It wasn’t my parents’ fault they had an irrational idiot for a toddler.

Apart from a few minor panic attacks brought on by masklophobia—my fear of oversized creatures—most of my childhood played out like the last chapter a Boxcar Children novel. On sweltering afternoons, my brother and I played Nintendo in the living room and on days that weren’t as violently hot, we ran through the sprinklers outside. Life was easy and the only real concern was whether I wanted turkey or bologna on my sandwich at lunch—even then, the answer was always turkey. However, every kid has experiences that truly traumatize and scar them. I got over my fear of Mickey and Santa eventually but like seeing the old man with the shovel in Home Alone, some fears, however irrational they may be, stick with us.

Our house in Coppell was near a small park built around a pond. There was a playground with swings, a bridge across the water that I’m almost certain was enchanted, and under the leafy canopy of the towering trees lived multitudes of ducks. My siblings and I loved riding our bikes on the hilly banks of the pond and throwing stale bread at the eager birds. White bread is crack for a mallard and as they chased the pieces we’d thrown their way, they’d swarm and change directions in unison like a school of fish. When I’d move toward them, they’d back up in fear that I was going to punt their kickball-sized bodies into the pond. They also made cute duck noises and seemed like they’d be nice pets to dress up in a raincoat, a top hat and a monocle. Most of the famous ducks—Scrooge, Donald, Daisy, Darkwing—may have been trouserless exhibitionists, but they always had style up top.

Sadly, the ducks weren’t the only inhabitants of the Duck Pond, though you’d think the title would imply they’d get first dibs on this particular waterfront. No, their bitter and cantankerous relatives, a flock of geese, also had a timeshare at the pond. Whereas ducks will give you your space, geese will not. Like their dinosaur cousins, geese will flock toward you en masse and won’t stop until they’ve got what they’re after.

Picture it. It’s sunset at the Duck Pond on a cool summer evening. I, a happy and assertive child, was minding my own business while feeding white bread to the hungry like Jesus would. The ducks waited patiently for their miracle loaf and quacked good tidings of thanks after I tossed them their share. I then felt a great disturbance in The Force. The geese who’d been idling on the other side of the pond clearly sensed there were miracle loaf handouts and like wicked Flying Monkeys, they took to the air. Soaring over the pond, they dove toward me like TIE fighters while honking like semis in a traffic jam. Losing no momentum as they landed, they waddled toward me while flapping their giant albatross wings. Their intention was to scare off the docile ducks and bogart the bread for themselves—selfish bastards—but feeling like it was I who was under attack, I ran up the hill screaming and waving the bag of bread toward Heaven knowing only Jesus could save me.

The geese must’ve thought this was some sort of a parade so they joined in, chasing after me while honking their most honkiest honks and nipping at my feet. Remember that moment in Jurassic Park when the T-Rex is chasing Laura Dern, Jeff Goldblum, and the British guy in the car? Laura turns around and lets out a blood-curdling scream of unparalleled terror, afraid she’ll be eaten by the approaching dinosaur? She learned that from me.

Screaming, I tried to evade the nippy snippy geese. I reached the top of the grassy hill where my parents stood and did that thing little kids do when they’re scared: I grabbed hold of my dad’s leg like a life raft. The geese didn’t care what I grabbed and one of them, I assume it was their evil leader, nabbed the bread from my hand. I felt like this was it—this was where my short little happy life came to an unceremonious end. The geese had won, I was defenseless against them, and as they closed in on me from all sides, I prepared for the worst. I swore I even heard their evil leader honk, “You’re mine now.” But just as I braced for a quick end, my father simply waved his hand at the demon birds and they immediately retreated. It was over as quickly as it started and I was still in one piece. We left the Duck Pond as the sun set over our neighborhood. The geese had flown back over to their side of the water, happy and content in getting exactly what they wanted: my bread. What did I get? A lifelong fear.

In junior high, we moved to another town and it would be twenty years before I revisited the Duck Pond. During my weekend back in Texas for my brother’s wedding, I took an afternoon to return to the places of my early childhood that were still lodged in my brain. I was amazed at how so much of Coppell felt so foreign yet how much of it felt like I’d never left. New housing developments and businesses peppered the streets but my elementary school still sat on the lot next to Bethany’s blue farmhouse, the alleys and fields where I’d ridden my bike still felt like they were mine, and the two houses we lived in still vaguely reminded me of home.

I parked on the side of the road and walked over to the Duck Pond. It was exactly how I remembered it to be, which was more satisfying than I imagined. It brought every memory I had of the pond back to life like a faded grayscale slideshow saturating into vivid greens and blues. The bridge, the fountains, the playground—they were all still there, untampered with and alive in real life as they were in my memory. I sat on top of the hilly side of the pond where I’d fed so many mallards and looked out over the tranquil afternoon. School wasn’t out yet so I was all alone with only the rustling sound of the ducks to keep me company.

Clarity is an empty hillside overlooking what you’ve moved on from.

Yes, out of the corner of my eye, I could see the flock of geese sleeping in the shade of a willow tree, but as I sat in the sun, I breathed in my childhood. It smelled like cut grass and pond water. This pond had provided me a place to grow and now that I’d been removed for so long, sitting on its hills again felt simple, peaceful and valuable. The world changes every day and sometimes, the tangible markers of our memories get swept away in those changes. This pond was the same though, this moment was the same and for that, I said a prayer of gratitude. Then I got the hell out of there because something woke up the geese and I knew they could sense my fear.

One Reply to “The Duck Pond”